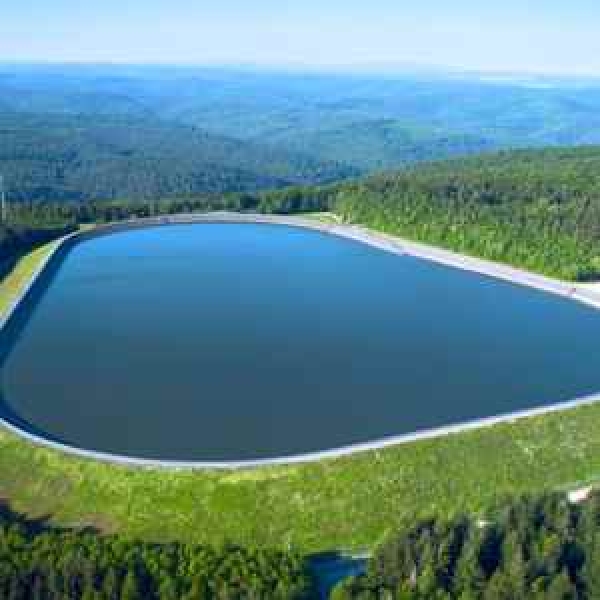 Pumped hydro is a solution in plain sight. And the U.S. is brimming with potential.

To cut U.S. greenhouse gas emissions in half within a decade, the Biden administration’s goal, the U.S. is going to need a lot more solar and wind power generation, and lots of cheap energy storage.

While battery innovations get a lot of attention, there’s a simple, proven long-term storage technique that’s been used in the U.S. since the 1920s.

It’s called pumped hydro energy storage. It involves pumping water uphill from one reservoir to another at a higher elevation for storage, then, when power is needed, releasing the water to flow downhill through turbines, generating electricity on its way to the lower reservoir.

Pumped hydro storage is often overlooked in the U.S. because of concern about hydropower’s impact on rivers. But what many people don’t realize is that most of the best hydro storage sites aren’t on rivers at all.

We created a world atlas of potential sites for closed-looped pumped hydro – systems that don’t include a river – and found 35,000 paired sites in the U.S. with good potential. While many of these sites, which we located by satellite, are in rugged terrain and may be unsuitable for geological, hydrological, economic, environmental or social reasons, we estimate that only a few hundred sites are needed to support a 100% renewable U.S. electricity system.

To function properly, power grids must be able to match the incoming electricity supply to electricity demand in real time or they risk shortages or overloads.

There are several techniques that grid managers can use to keep that balance with variable sources like wind and solar. These include sharing power across large regions via interstate high-voltage transmission lines, managing demand – and using energy storage.

Batteries deployed in homes, power stations and electric vehicles are preferred for energy storage times up to a few hours. They’re adept at managing the rise of solar power midday when the sun is overhead and releasing it when power demand peaks in the evenings.

Pumped hydro, on the other hand, allows for larger and longer storage than batteries, and that is essential in a wind- and solar-dominated electricity system. It is also cheaper for overnight and longer-term storage.

Pump hydro projects can be controversial, particularly when they involve dams on rivers that flood land to create new reservoirs and can affect ecosystems.

Creating closed-loop systems that use pairs of existing lakes or reservoirs instead of rivers would avoid the need for new dams. A project planned in Bell County, Kentucky, for example, uses an old coal strip mine. Little additional land is needed except for transmission lines.

An off-river pumped hydro system comprises a pair of reservoirs spaced several miles apart with an altitude difference of 200-800 meters (about 650-2,600 feet) and connected with pipes or tunnels. The reservoirs can be new or use old mining sites or existing lakes or reservoirs.

On sunny or windy days, water is pumped to the upper reservoir. At night, the water flows back down through the turbines to recover the stored energy.

A pair of 250-acre reservoirs with an altitude difference of 600 meters (1,969 feet) and 20-meter depth (65 feet) can store 24 gigawatt-hours of energy, meaning the system could supply 1 gigawatt of power for 24 hours, enough for a city of a million people.

The water can cycle between upper and lower reservoirs for a hundred years or more. Evaporation suppressors – small objects floating on the water to trap humid air – can help reduce water evaporation. In all, the amount of water needed to support a 100% renewable electricity system is about 3 liters per person per day, equivalent to 20 seconds of a morning shower. This is one-tenth of the water evaporated per person per day in the cooling systems of U.S. fossil fuel power stations.

Little pumped storage has been built in the U.S. in recent years because there hasn’t been much need, but that’s changing.

In 2020, about three-quarters of all new power capacity built was either solar photovoltaics or wind power. Their costs have been falling, making them cheaper to build in many areas than fossil fuels.

Australia is installing solar and wind three times faster per capita than the U.S. and is already facing the need for mass storage. It has two systems under constructionthat are designed to have more energy storage than all the utility batteries in the world put together; another dozen are under serious consideration. None involve new dams on rivers. The annual operating cost is low, and the working fluid is water rather than battery chemicals.

Shifting electricity to renewable energy and then electrifying vehicles and heating can eliminate most human-caused greenhouse gas emissions. The U.S. has vast potential for off-river pumped hydro storage to help this happen, and it will need it as wind and solar power expand.

More in this category: « Small-scale, domestic solar solutions are helping to electrify Nigeria
back to top